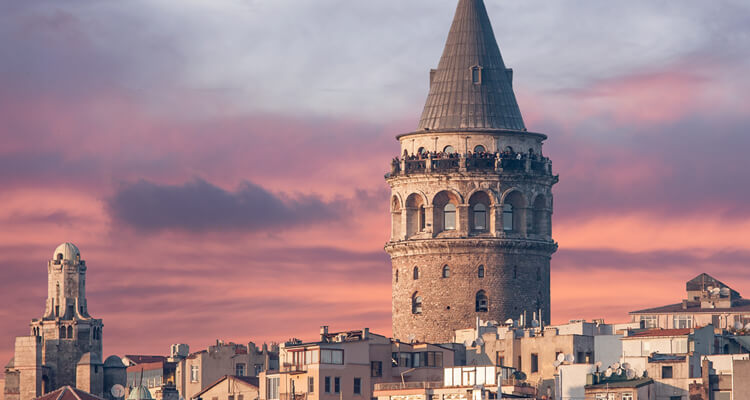 When Istanbul is mentioned, the first thing that comes to mind is the city’s deep-rooted history and magnificent works from this history. Galata tower is one of the most imposing and magnificent of these works.

The district, which hosts the Galata Tower, which is one of the most important works of the historical city view, has an appearance that brings together the past and the present, bearing the traces of the multicultural structure of the city. This is the most romantic one of the works to visit in Istanbul. Travel Advice on Turkey !

We leave you alone with our article where you can discover the Galata Tower.

HISTORY OF THE GALATA TOWER

Galata tower, one of the most important symbols of the city, was built in 528 in the Galata district of Istanbul. This tower, one of the oldest towers in the world, was first built by the Byzantine Emperor Anastasius as a lantern tower. It was severely damaged during the crusades in 1204 and was repaired by the Genoese in 1348 using masonry stones.

The Genoese restored the tower, which was the tallest building in the city in those years, and changed its name to the tower of Christ. The tower was elevated in 1445-1446, and then, after the conquest of Istanbul by Mehmet the Conqueror in 1453, it was under the protection of the Turks and was restored every century. It was used as a shelter for Christian prisoners working in the Kasımpaşa shipyards in the 16th century.

An observatory was established in the time of Sultan Murat III, and this observatory was closed in 1579. In 1638, the flight of Hezarfen Ahmet Çelebi from Galata to Üsküdar by wearing his eagle wings made of wood attracted the attention of all European countries, especially England. There are still articles or models about this flight in many countries. The Galata tower, which was used as a fire watchtower in 1717, burned more than half of it in a fire that broke out during the 3rd season. The tower, which was repaired later, was damaged again by an oil released in 1831. In 1875, its roof was toppled, and after the great repair that started in 1965 and completed in 1967, it took its present appearance.

PHYSICAL PROPERTIES OF THE GALATA TOWER

The height of the tower from the ground is 69.90 meters. The thickness of the outer wall is 3.75 meters and the inner diameter of the round is 8.95 meters. The approximate weight of the tower, which was built with an outer diameter of 16.45 meters, is estimated at 10 thousand tons.
This tower, where you can watch the most beautiful 360-degree panoramic view of Istanbul, has been included in the list of world temporary heritage by UNESCO.

THE LEGEND AND HISTORY OF THE GALATA TOWER

The best-known legend of Galata tower is undoubtedly the love this flamboyant tower feels for the lonely and delicate girl’s tower on the sea. These towers, who glanced at each other unaware of their love for years, were thinking about how to tell each other their love. One day Hezarfen learned that Hezarfen would fly to Üsküdar from Galata and asked him to deliver all the letters he wrote to Ahmet Çelebie. Approaching the Salacak beach, Hezarfen leaves the letters and waves and winds deliver the letter to the maiden’s tower. Thus, the Maiden Tower is sure of Galata’s love. Thus, a love that defies centuries was born between the two towers.

According to a story based on the Roman period, it is that you will marry the first person of the opposite sex to the Galata Tower. According to some, this spell is broken if you go out alone or with someone else.

WHERE IS THE GALATA TOWER?

Galata Tower is in the Galata district of Istanbul. You can reach the tower on foot from Karaköy and from Karaköy-Beyoğlu historical Tunnel. You can reach this tower, which hosts thousands of love, by walking along Istiklal Avenue from Taksim.
If you are coming from Kabataş, Zeytinburnu, Eminönü direction, you can use the Kabataş Bağcılar tram line to climb up the Galata Tower in Karaköy.
If you are coming from Şişli, Sarıyer, Levent, you can use the Hacıosman-Yenikapı metro to get off at Şişhane and go down the slope to the tower easily.
ADDRESS: Bereketzade, Galata Tower, 34421 Beyoğlu / İstanbul

There is a restaurant where you can dine with 360 degree panoramic Istanbul view. This restaurant, which is frequently preferred especially for breakfast, has a very wide menu. While the meal for two people is around 25 – 30 $, if you want to drink tea and get up, you will have to pay 1$.

It can be visited every day of the week between 09.00-19.00. Entrance to the tower is determined as 5$ for tourists. There is no student discount and children under 5 years old can enter the tower for free.